Your family is going to love eating Cherry Cola BBQ Pulled Pork on sandwiches, with potato salad or on BBQ nachos! It’s a simple recipe that can be thrown together and cooked low and slow in the oven or in the crock pot. A little salt and pepper, BBQ sauce and our secret ingredient of cherry cola make for a “fall apart” tender pork roast that you’re going to want to eat all the time!

I learned to make a BBQ pork roast when I moved to Tennessee. A sweet friend at the time showed me how to cook one up in the oven so that my family could enjoy pulled pork without having to run to a BBQ joint all the time.

SERVE THIS WITH: Creamy Southern Coleslaw

Now, of course, smoked pulled pork is the best. But if you don’t have a smoker, this little method will more than do in a pinch for creating melt in your mouth pork that your family won’t be able to resist!

Just look at that glaze and spice rub crust! That’s what we’re talking about right there! All it takes in a little salt and pepper and a few red pepper flakes rubbed into the pork before cooking. Then a good coat of BBQ sauce and sweet cherry cola create that shiny glaze that adds beau coup of flavor!

What You Need To Make Cherry Cola BBQ Pulled Pork

But inside… That pork is fall apart tender and moist! It can easily be shredded with a fork and served up on a bun or just eaten right there. Which is what The Engineer is always wont to do.

He just can’t stop himself from coming by and eating a bite or two or three while I’m trying to get it served up. And that’s some kind of testament. Because if that native Texan (where brisket is king) loves it… well, you can bet your boots you will too! 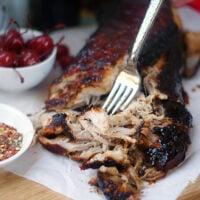 Also can be cooked in the oven at 375 degrees Fahrenheit for 4 hrs.