The Engineer has been asking “How can you have a southern blog and not write about college football?,” And since I do love some football food and tailgating, I really had no excuse to put it off any longer. Whatever your allegiance, it’s football time in the South!

In the fall, Saturdays down South are packed with Alma Mater game day allegiances and traditions. And the traditions surrounding the game create an experience almost as important as the game itself. In the spirit of every Saturday’s festivities, I’ve put together a vintage tailgate in honor a little college football history and my state’s 114 year rivalry with legendary Alabama. 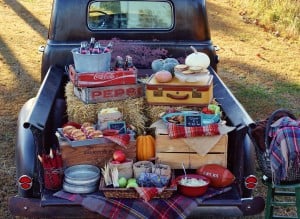 There is just something about a vintage tailgate that just feels right, especially a cozy throwback look that says football just as much as it says fall.  Pumpkins, apples, and peanuts, along with bales of hay and plaid blankets are all you really need to pull together this nod to golden days of yore.  An old school pennant or two, if you have them, would be great.  Not to mention any of those plaid thermoses or metal picnic baskets I have been scouring antique stores for.  I haven’t found any yet, but just give me some time!

The Game That Never Was

The arch rivalry between the University of Alabama (the state where I went to high school) and the University of Tennessee (the state where I live now) began November 28, 1901, the first time these two teams faced each other.  SEC football looked a lot different then. The season was only 5 games long and played between Ole Miss, Georgia, Auburn, Mississippi A&M, Tennessee, and  Alabama.  Many games were played in the Quads on the campuses.   (Can you imagine?  In the Quad vs. today’s stadiums. Think on that a minute.)

This first game between these two teams was a disaster that had neither a winner nor a loser. Referees made a controversial off sides call.  Fans rushed the field.  All out brawling ensued.  The game was called and went in the books as an unresolved and prematurely concluded 6-6 tie.

And fans need resolution, bragging rights and the like.

Maybe that is why thousands of game-goers on both sides get all het up about what is known as the “Third Saturday in October (even though the game has been played on the fourth Saturday in recent years). Of course, over the years, other ingredients have been added to this rivalry, keeping it stirred and well-seasoned.  So regardless of how the season is going, of streaks, or of favorites, the 315 miles between these schools always creates a lot of passion.