There is nothing like the combination of a superb cup of coffee and soft, warm cinnamon roll. The warm, spicy cinnamon flavor and dreamy, sweet glaze pairs perfectly with a savory cup of perfectly brewed joe. A perfect marriage.

And even though that is one of my very favorite ways to start a morning, we all know we can’t have that all the time… or even half the time, unless… you guessed it, you’re sipping a hot cup of coffee with homemade cinnamon roll creamer!

What You Need To Make Cinnamon Roll Coffee Creamer

This coffee creamer is made by brewing a fresh “cinnamon extract” using cinnamon sticks. That extract is then used to create a simple syrup with intense flavor. It’s really easy and is so much better than using ground cinnamon for two reasons.

Most importantly, brewing cinnamon sticks creates a deep, rich infusion of that warm, spicy cinnamon flavor we all love. Ground cinnamon can’t come close to creating this kind of flavor when added to a liquid. Why? See reason #2!

Secondly, because cinnamon is a bark, it doesn’t dissolve when added to a liquid. Using ground cinnamon means that your cinnamon will never fully incorporate into your creamer and will always be floating around in your coffee. It’s just added to the liquid, but never becomes a real part of your creamer.

To make your extract, simply boil 6-8 cinnamon sticks in 2 C of water on your stove top until the water is reduced by half (8-10 min). The water will be a beautiful dark, cinnamon color, a tell-tale sign that it is infused with warm cinnamony goodness!

Make the simple syrup. When the water has been reduced by half, add brown sugar to your fresh “extract.” Let the liquid continue to cook with the cinnamon sticks in it until it becomes thick and syrupy (about 5 minutes or less). Remove from the stove top and take out the cinnamon sticks. Whisk in the maple syrup, vanilla and salt.

Add the cream. Whisk in half and half and that’s it! Pour your homemade cinnamon roll cream into a jar or creamer carafe.  You can either serve it immediately or store it tightly covered in the refrigerator until you are ready to use it!

How Long Will It Last

This recipes makes 3 Cups of coffee creamer which equals about 24 fluid ounces or 48 Tablespoons of creamer. It should keep in the fridge for a good 10 days or so.

What To Serve with This Homemade Coffee Creamer

Enjoy a hot cup of coffee with this creamer and thick slice of this Fresh Apple Cake, Hummingbird Bannana Bread or Spiced Carrot Zuchinni Muffins! Make brunch extra special when you serve up this coffee creamer and Make Ahead Blueberry Bake or Overnight Sausage Breakfast Casserole with Croutons.

A lot of times we think about coffee as fuel to go, go, go, but a good cup is always a delicious opportunity to slow down and savor the sweet moments of life. And inviting others to share those moments with you is real living is all about. I hope this simple Homemade Cinnamon Roll Coffee Creamer inspires you to do just that!

IF YOU MAKE THIS RECIPE, BE SURE TO LET ME KNOW!

RATE IT, LEAVE A COMMENT OR SNAP A PHOTO. 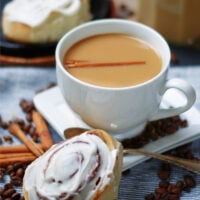 Get Warm & Cozy with a FREE Soup Cookbook!

Receive this downloadable mini cookbook as an EMAIL BONUS when you SUBSCRIBE!

Success! So glad you to have you! Check your Inbox for the FREE Cookbook..