This recipe for Skillet Chicken Fajitas delivers authentic fajita sizzle and flavor at home with a simple, homemade lime marinade and fajita seasonings. Loaded with all the classic savory goodness from cumin, chile powder, cilantro, garlic and fresh limes, these skillet fajitas are easy enough for weeknights and definitely fun enough for weekends. It’s our go-to and sure to be yours too!

Who can resist the sound of hot, sizzling fajitas? If you know, you know! And for all of us who LOVE Mexican food, we know what it’s like to sit in a restaurant and hear that signature crackle and zip followed by swoon inducing aromas. Heads turn. Mouths water. All eyes follow that iron skillet loaded with sizzling chicken, beef, peppers and onions.

Fajitas are one of our all-time favorite Mexican dinners here at The Cottage. Even more than tacos. So when we have a go-to chicken fajita recipe, it’s no small thing. That pop, that sizzle, those aromas, all that flavor… it’s got to be the real deal.

This Skillet Chicken Fajita recipe guarantees authentic restaurant-style fajitas every time. It’s easy, ready in about 30 minutes and is made all in one skillet. This recipe can also be used for steak and shrimp. Now you can have classic fajitas at home too, any time you get the craving. It doesn’t get any better!

How to Make Skillet Chicken Fajitas

Marinate the chicken. Whisk together all marinade ingredients in a large measuring cup. Slice chicken into thin strips, lengthwise (against the grain of the meat). Place the strips into a gallon-sized zip top bag. Pour marinade into the bag. Seal, then rotate and massage the bag to spread the marinade, evenly covering the chicken. Let marinate for 20 minutes.

Cook the Veggies. Heat 1 tablespoon of canola oil in a 12-13 inch cast iron skillet over high heat until oil is sizzling. Place thinly sliced bell peppers and onions in hot skillet. Use tongs to stir and turn veggies over until they are tender and there is some char/caramelization (about 5-6 minutes). Remove peppers and onions from skillet as they become done and place on a paper towel.

Cook the Chicken. Drain the marinade away from the chicken. In the same skillet as the veggies were cooked in, heat a second tablespoon of canola oil over high heat until sizzling. Add well-drained chicken to the skillet. Use tongs to turn chicken over and stir until chicken is cooked throughout and there is some char.

Serve. Add peppers and onions back to the skillet. Toss with chicken and serve with warm tortillas and desired toppings.

Consider prepping your bell peppers and onions 1-2 days before. Even slicing the chicken and storing it overnight helps cut down on prep time. I don’t recommend marinating the chicken overnight, because the lime juice can break down the thin strips too much.

Use the 20 minute marinating time the day of, to prep toppings, warm tortillas and set the table. I use this tortilla warmer to keep my tortillas soft and warm throughout the meal. It’s also a miracle worker for keeping pancakes warm!

What Toppings Are Good On Fajitas

Sour cream is the one topping that I can’t live without when it comes to these Skillet Chicken Fajitas. Here are a few others that definitely turn fajita night into fiesta night!

Don’t want to eat your fajitas with flour tortillas? Eat them as a rice bowl with white or brown rice and black beans.

What to Serve with Skillet Chicken Fajitas

If You Love Tex Mex & Have Made This Recipe, Give It All The Stars & Leave A Fun Comment! I Love Hearing From You! 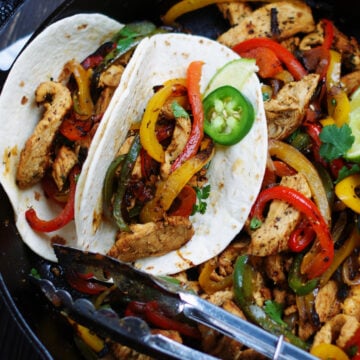