Peeling potatoes is a real downer when it comes to making tasty homemade potato dishes…. Except for this super easy Slow Cooker Shortcut Potato Soup! It’s packed with all the yummy flavors of a loaded baked potato soup but none of that peeling and dicing that usually comes with it.

What You Need To Make Slow Cooker Shortcut Potato Soup

There is possibly nothing I like less than peeling a potato. Chalk it up to my tiny little girl hands. The potato is hard to hold. A potato is peeler is awkward and downright terrifying at the same time. And I am pretty sure every old war film I’ve ever seen has some poor soldier peeling piles of spuds as punishment. There’s just nothing “appeeling” about it.

That’s why I almost jumped for joy when I realized that frozen diced hash brown potatoes are the perfect candidate for quick and easy soup making! They make it a snap to quickly throw the ingredients in the crock pot before a busy day starts and have a cozy bowl of homemade soup waiting when it ends. And I don’t have to worry about losing a thumb or finger peeling potatoes!

And thickening your potato soup is no problem in the slow cooker either. Many stove top recipes use a little flour to create a roux to start their recipe.  But for this recipe, a little cornstarch mixed in milk added at the end thickens that soup right up and lends itself to crock pot cooking perfectly (Not to mention makes this recipe gluten free, if that’s what you need!)

If it comes down to it and you still want your soup a little thicker, use a potato masher to mash up some of those diced potatoes before serving. Just don’t mash all of them. A little potato now and then are what my people are looking for in a hearty bowl of soup!

Homemade potato soup can be quick and easy! Armed with a crock pot and some diced hash browns, we’re nigh on unstoppable (and we get to keep our thumbs)!

IF YOU MAKE THIS RECIPE, BE SURE TO LET ME KNOW!

RATE IT, LEAVE A COMMENT OR SNAP A PHOTO.

For an even thicker soup, use a potato masher to mash some of the potatoes.

MAKING IT EASY TO HOST & SERVE

If you like these recommended products, then you’ll love Southern Discourse’s Amazon Store! 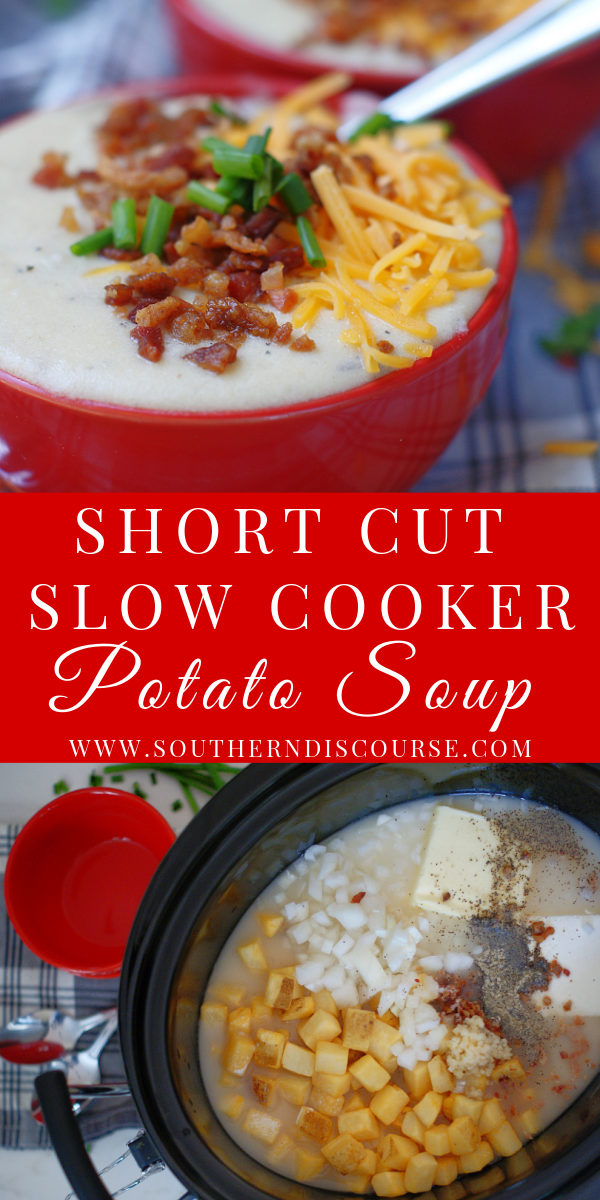 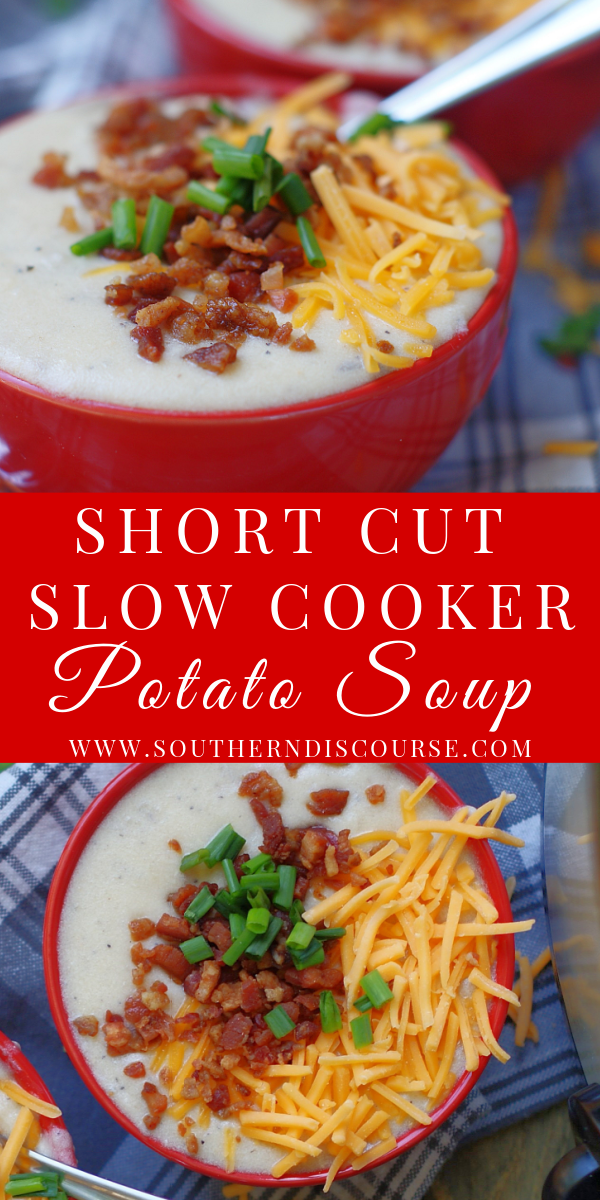 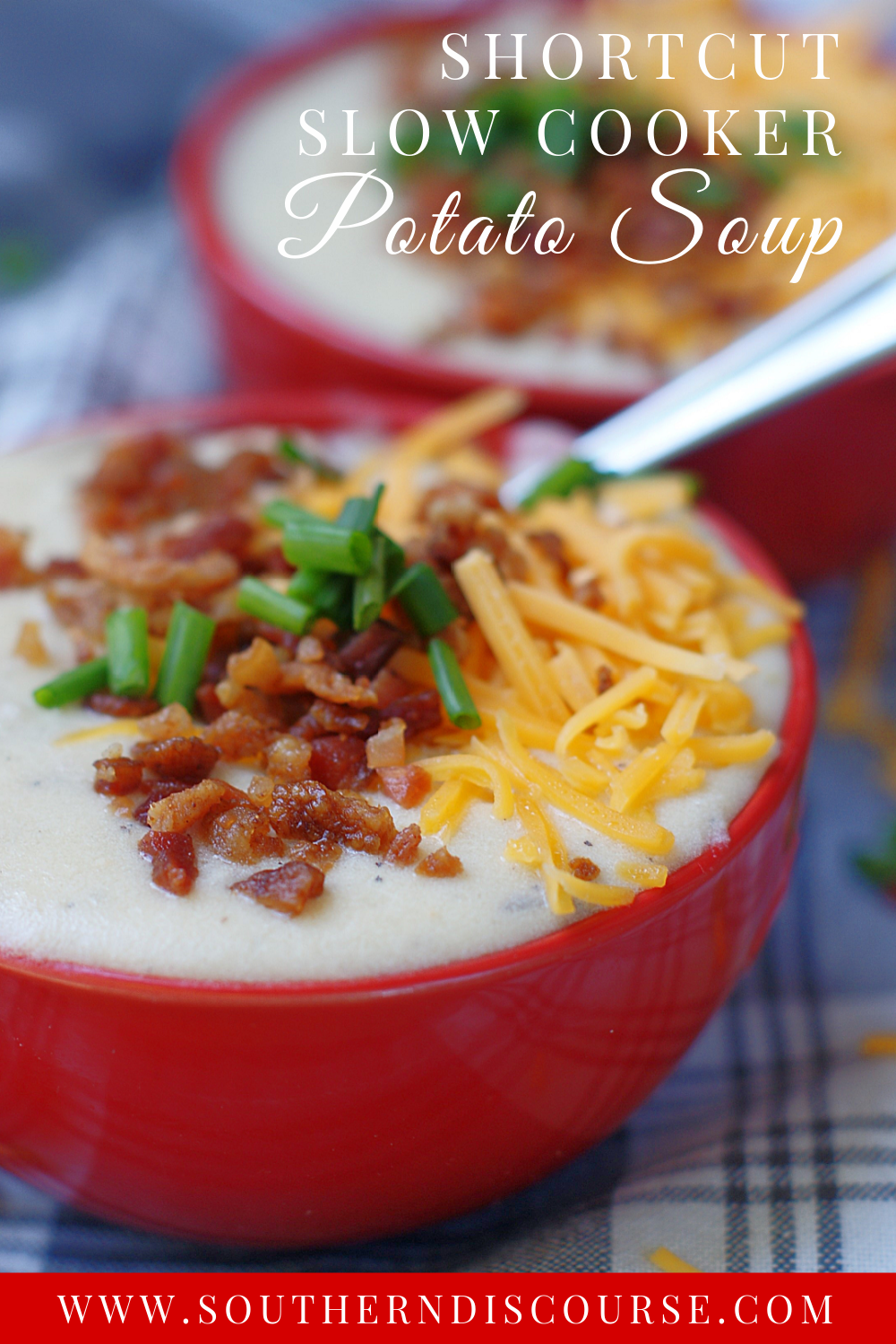