When I think about the Kentucky Derby, images of large hats, seer sucker suits and, you guessed it, mouthwatering Kentucky Hot Browns spring to mind.  Ahhh… thank goodness for spring, for horse races, and this delectable little open-faced sandwich that has become synonymous with “the most exciting two minutes in sports.” 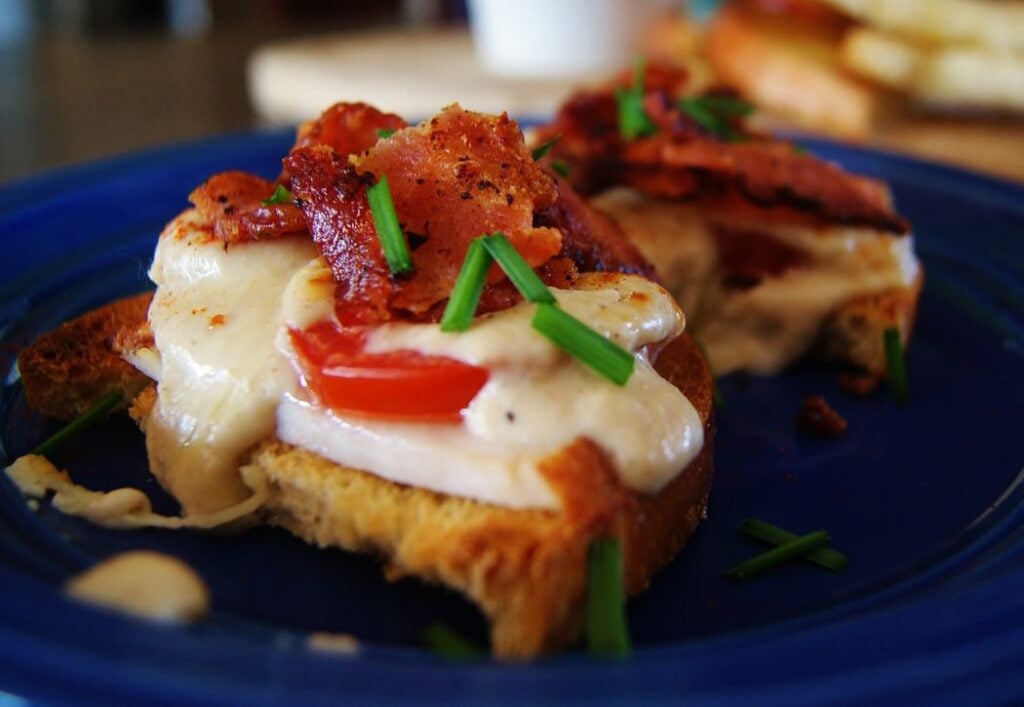 Every year, the first Saturday in May sees thousands of Southerners gather at Churchill Downs in Louisville, Kentucky to eat, to see and be seen, and to cheer as 20 thoroughbred horses race around a dirt track.  Also known as “The Run for the Roses,” the Kentucky Derby is the first leg of the American Triple Crown, a series of three races specifically for three-year old thoroughbred horses that begins in May and ends in early June. 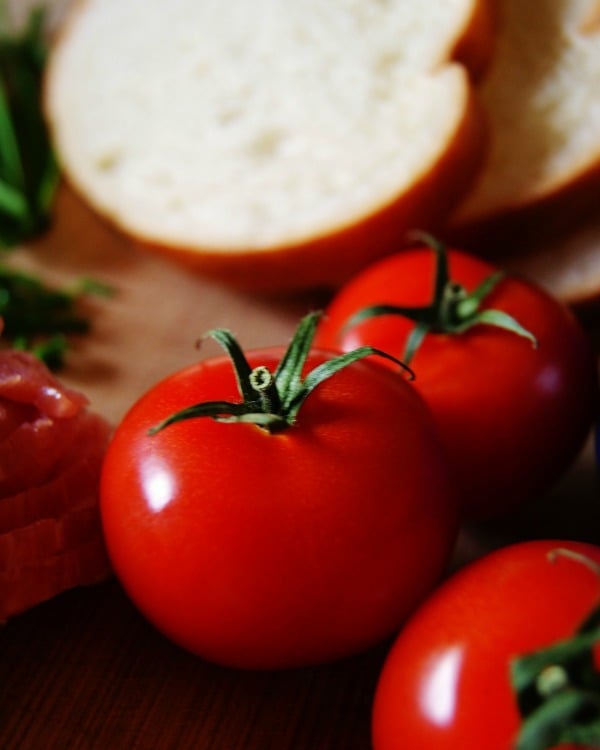 This race has been run every year without fail since 1875 and consequently, as you can imagine, is steeped in more tradition than a southern Sunday morning service.  From sipping mint juleps and sampling some of the South’s finest fare to southern ladies and their gents topped with wonderful hats that harken back to a more genteel moment in fashion, The Kentucky Derby and its eats are just about as southern as it gets. 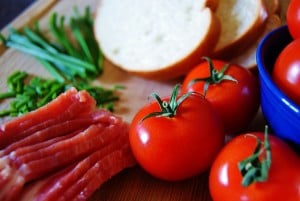 So pop on your fancy hat and get in the kitchen because I’ve got a Triple Crown Menu that features simple, but authentic, Kentucky Hot Browns along with other traditional goodies guaranteed to make your own Derby Day Party a galloping success.

On Our Triple Crown Menu:

To make these heavenly open-face sandwiches, we’re going to have to get chef-y for a minute and make a sauce.  But never fear, it’s not that hard.  If I can do it, anyone can. One of the things that makes a Hot Brown a Hot Brown and not just a turkey & cheese sandwich is its classic mornay sauce. This sauce begins by melting butter and slowly whisking in flour and letting it brown just a little to form a roux. It’s super similar to making a base for a gravy.  So, if you’ve made gravy, you’ve got this.  If you haven’t, you’ve still got this. 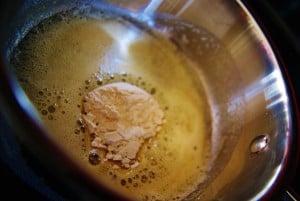 Now, it’s time to get saucy by whisking heavy cream into the roux and letting it simmer for a couple of minutes.  We could stop at this point and pat ourselves on the back because we’ve made what is called a Béchamel sauce- one of the 5 classic mother sauces of French cooking.  We are SO. FANCY. And we didn’t even know it! 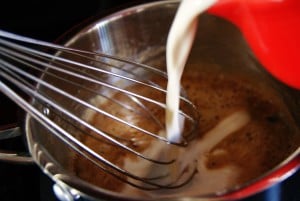 But we don’t want to stop there because as fancy as Béchamel is, we are wanting Mornay.  And why wouldn’t we?  A Mornay sauce is a white CHEESE sauce.  Cheese, my people!  So let’s get on with this last step!  Remove sauce from heat and slowly whisk in the 1/4 C Parmesan and 1/4 C cheddar cheese until it’s all smooth and dreamy. 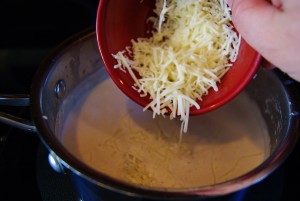 Sprinkle in that nutmeg, salt and pepper to make it tasty and look at you!  So chef-y.  You just made a fabulous Mornay! 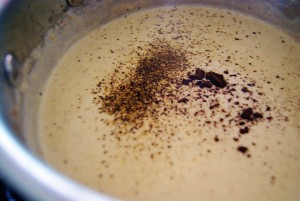 Ok, enough cheffing around, we’ve got to get down to open-faced sandwich making. It’s time to butter both sides of the slices of sour dough and toast. 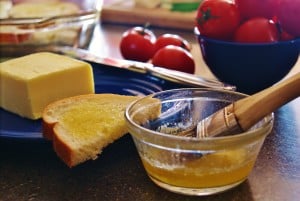 Fry the bacon and rough chop it. 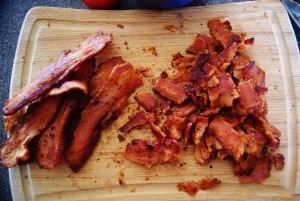 To build our Hot Browns, place one slice of toast in the bottom of a 13×9 baking dish (you will need 2 13X9 dishes for this recipe). Top with turkey, then 2-3 slices of tomato.

Spoon your delectable mornay sauce over the tomatoes and sprinkle the tops with the rest of your Parmesan. 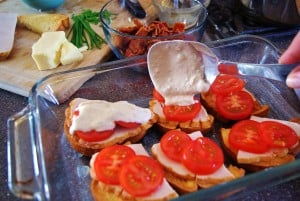 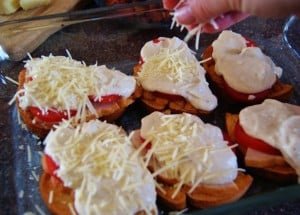 Now it’s time to brown these babies under a broiler until the cheese begins to brown and bubble.  Look at that gloriousness right there. 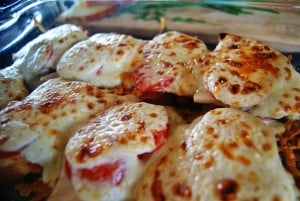 Hold on to your horses though (Kentucky Derby jokes) because we’re about to add the bacon.  I know.  Cheese sauce and bacon.  You’re gonna have to fan me a little before we can move on.  Garnish with a little smoked paprika and chives and serve ’em up immediately while they’re still hot. 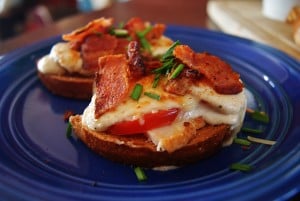 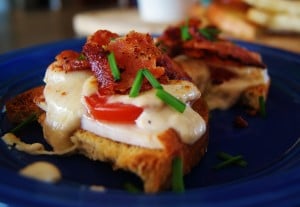 It’s not really a Kentucky Derby party without real Kentucky Hot Browns.  And these are sooo good and hearty your southern gents won’t really mind that you are also serving tea sandwiches at this gig.  To learn more about how Kentucky Hot Browns became a thing, check out its story from the Brown Hotel. 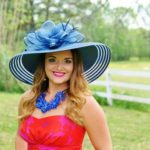 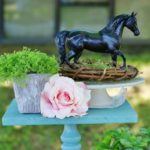 How to Host Your Own Derby Party 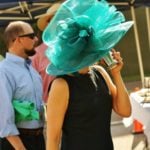 Derby Day at The Dixie

Catch this and other great recipes at Weekend Potluck, Meal Plan Monday, and Full Plate Thursday.