There aren’t many recipes more southern than Louisiana Pickled Shrimp in a jar! A long- standing classic appetizer, these plump Gulf shrimp soak in a bright, lemony, Creole seasoned marinade and are delicious served on baguettes, by themselves or as part of a meal tossed in a salad or buttery pasta!

Anything pickled in the South is a win, but nothing comes close to this traditional finger food- tangy, savory Lousiana Pickled Shrimp! Of course the shrimp is more marinated than actually pickled, but nobody’s getting specific when it comes to the time honored tradition of balancing cocktail napkins and plump, briny Gulf prawns at the latest party.

The pickling marinade for these creole shrimp is tart with lemon and vinegar, salty, spicy and herby with just enough sweetness to balance it all out. The bay leaves, Worchestershire sauce and Creole seasoning create deep layers of savory southern flavor. And the longer the shrimp soak, the deeper the flavor gets, making this the perfect make-ahead recipe for every occasion.

How to Make Louisiana Pickled Shrimp in a Jar

Shrimp. Every good shrimp recipe starts with good shrimp. For me that equals shrimp fresh from the Gulf of Mexico or off the Carolina coast. Unfortunately, I don’t live in either place, so frozen is my best bet for delicious shrimp. If you’re buying frozen too, look for shrimp that has been individually frozen for best taste.

Look for large (26-30 or 31-40 count) shrimp that has been peeled and deveined. Whether or not you buy tail on or off is up to you. I think tail on looks so pretty in the marinade with the lemons, herbs and onion, but it’s hard for guests to eat a tail on shrimp off a toothpick or on a sliced baguette. So think about how you will serve them when making this decision.

Pickling Marinade. While the shrimp are what this dish is all about, the marinade is where the real magic happens! In a large measuring cup, whisk together oil, vinegar, lemon juice and zest, Creole seasoning, salt, garlic, sugar, mustard seeds, pepper flakes and a splash of Worcestershire sauce.

Jarring it Up. In 2 large wide mouth canning jars, layer onion slices, lemon slices, shrimp and bay leaves. Pour the marinade over the layers, being careful to put the same amount in both jars. Put the lids on the jars and seal them tightly. Turn the jars over several times to evenly distribute the marinade so everything gets a chance to soak up delious flavor! Do not shake the jars though. Put the jars in your fridge overnight so the shrimp can soak and bathe and become just about as good as it gets!

How to Serve Louisiana Pickled Shrimp

Pickled shrimp with it’s herbs, spices and layers of lemons and onions looks amazingly delicious and inviting served in a large glass bowl, cut glass bowl or trifle dish. Served this way, this recipe can also serve as a striking centerpiece for your party spread.

Have tongs on the ready so guests can pluck their shrimp from the bowl and shrimp or appetizer forks or toothpicks so they can enjoy their little briny bites at their leisure.

Of course, there’s no denying the appeal of individual servings in small mason jars, stemmed or other glassware. Be sure to include a little lemon, onion and marinade in each serving.

If you’re serving with toasted baguette slices, just arrange the baguettes around your bowl or on a platter nearby for guests to use, if they like.

If serving outdoors, keep shrimp out of the sun and sit individual servings in a tray of ice or serve all of the shrimp in an iced bowl.

How Many Shrimp Do I Need to Prepare?

When making an appetizer for a party or get-together, sometimes it can be hard to estimate just how much people will eat. The rule of thumb, though, is to always be generous. It’s better to have too much rather than too little, and you never want family & friends to feel like they have to skimp or pass because there isn’t enough to go around.

With that in mind, allowing for 2-3 large marinated shrimp per person usually suffices, especially when serving them with baguettes, when other finger foods are also being served or these shrimp are an appetizer before a meal. When pickled shrimp are the only app or snack and no other food will be served, I prepare 4-6 per person.

How Long Do Pickled Shrimp Last?

Since this is not a true pickling or preserving recipe, these shrimp will last about 1 week in the refrigerator as long as they are completely covered by the marinade.

Add a little Tex Mex flair to your shrimp by adding cilantro instead of parsley and jalapeno slices instead of red pepper flakes. Or just develop those layers of herby flavor by simply adding some fresh dill or sprigs of thyme to the recipe.

If You Make This Recipe, I Can’t Wait To Hear About It! 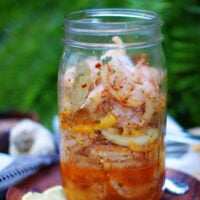 And Don’t Forget to Try This Other Jar Marinade Recipe For More Party Eats!