Absolutely loaded with yellow squash, green bell pepper, onion and celery, Squash Dressing is chock full of delicious, savory flavor! An old fashioned version of classic southern cornbread dressing, it is served as a holiday side dish, for Sunday dinners and in mid to late summer when all that delicious squash comes in.

There is just something about a good pan of Cornbread & Squash Dressing that surpasses all other versions and varieties.  While the mild flavor of yellow squash won’t overwhelm you, the moistness it brings to the cornbread will certainly cause you to sit up and take notice.  Then there’s there’s the whole host of support vegetables, like green bell pepper, onion and celery that add layers of savory  flavor.

And side dish?  Who am I kidding?  Good dressing is no side dish.  It’s culinary feat.  A well-guarded secret.  In the South, cornbread dressing is the whole darn holiday show. And only the best cooks in the family get to make it.

Every Southern cook must have a good cornbread dressing recipe in their wheel house.  It’s a must. Non-negotiable if you plan to reach the pinnacle of what Southern cooking is all about.

And like most recipes for this all important holiday dish, the one my family loves the most has been passed down over time.  I learned to make it, like most home cooks, in the kitchen with my mother and mamaw.

It was a highly anticipated cooking event, a recipe prepared with both fanfare and reverance.  And there was something almost sacred about the way they would roll up their sleeves and use their hands to gently mix, coax and finally transform that cornbread into the holiday side dish we’d been waiting for all year.

How to Make Squash Dressing

This dressing starts off like any good cornbread should-  in a sizzling hot cast iron skillet.  I put a little oil in my skillet and stick it in the oven as it preheats.  You know you’ve got it right when you hear that sizzle and pop as soon as your batter hits the pan.  This is what puts that great crisp on your cornbread so that it will cook up nice and fluffy like it should!

I also go ahead and just cook all those vegetables right in the cornbread instead of sautéing or cooking them down first.  This has a couple of benefits.

After the cornbread cools enough to work with, we have to break it back down.  That’s right!  Your beautiful cornbread.  Pull it from the pan.  Break it into pieces and start adding all those things that make is so yummy, like butter and eggs and broth.

So roll up your sleeves, add all those secret ingredients and get to squishing and mixing with your hands.  You have to work those flavors into that cornbread, and no fork or wooden spoon does it quite the same.

When everything is mixed, it’s time to put that cornbread into a casserole dish and put it back into the oven.  What goes in as cornbread, comes back out as Cornbread Dressing!

Making it Ahead of Time & Freezing

This dressing is perfect for making ahead of time & freezing.  Simply put the dish together, but do not bake. Cover tightly and freeze for up to 3 months or simply cover tightly and store in the fridge overnight.

Other Thanksgiving Side Dishes You’ll Love 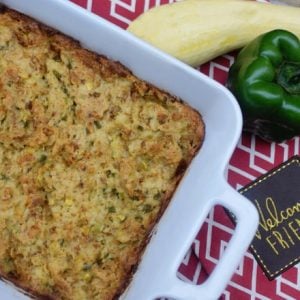