A low country boil goes by many names– shrimp boil, crawfish boil, crab boil, frogmmore stew, all depending on the ingredients.  It’s a southern low country favorite simmered in rich heritage.  These gatherings conjure images of summer, long-standing traditions, and the joys of close friends and family.  A boil done right isn’t just a meal; it’s an event, replete with the way southerners like their food– hands-on and enough to share.

With Labor Day just around the corner, a boil is a great idea for that gathering you should be planning (yes, you should be).  It’s an easy, stress-free way to host a gathering with a straightforward preparation and simple clean up.  So here are a few ideas to help you throw a true southern boil. 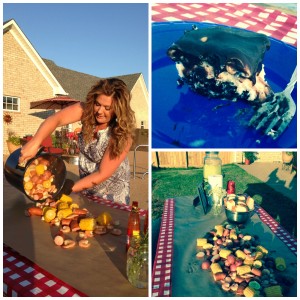 Those who are new to a boil sometimes think that this means standing over a large pot, stirring massive amounts of food while one swelters and melts in the summer heat.  This just isn’t so.  It’s one of the easiest and quickest  meals you can do for a large group of people.  Short prep time, quick cook time that doesn’t really have to be minded (no stirring), and easy one pot clean up.  Just doesn’t get much better than that. 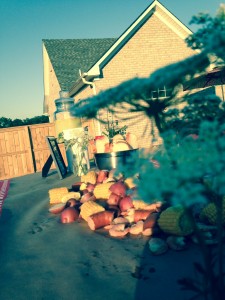 Shrimp with the shells on are important to a good boil, not only do the shells add flavor to the boil itself, but peeling the shrimp is a fundamental part of the activity and interaction at this gathering.

So, let’s talk about serving this one pot wonder. 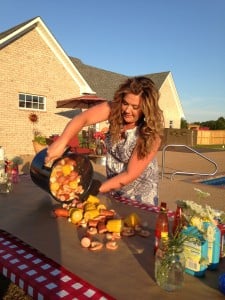 True shrimp boils are historically outdoor events.  The food is poured down the center of the table; lemons are squeezed over it, and guests serve themselves, eating without plates or utensils.

I have a large 8ft. wooden picnic table that I use for my service.  Some people use several 6-8 ft. folding tables and chairs which work well too. To cover the table, I bought a red and  white vinyl checked table cloth.  Wal-Mart had some great ones this summer for just $3.  The beauty of an old wooden table and a cheap vinyl table cloth is that I could wrap the sides of the tablecloth under the table and just staple them to the underside of my picnic table with my staple gun to keep everything looking neat and trim and to keep the table cloth from blowing in the breeze.

Next, a paper runner down the middle of the table is added.  This is what the boil is actually served on.  The other nice thing about the paper runner is there are no serving dishes to wash afterwards.  Just roll up the paper and toss it! 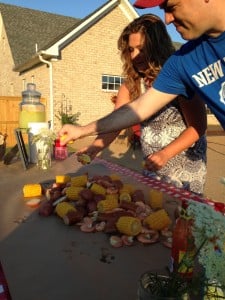 I use a roll of brown craft paper for this.  You can also use the brown paper that is sold for mailing packages.  It’s a really good, heavy paper and works just as well.  (Some people use newspaper to line the center of the table, but there’s just something about wet newsprint that seems less than appealing to me.)  To create my runner, I just stapled the lead end of the paper to the underside of one end of the table, unrolled the roll of paper down the table, cut the paper to size, and stapled it to the underside of the other end of the table.  This ended up being a two person job– one person to keep the paper steady and the other to roll and cut.  I enlisted the help of my son, and we were done in no time flat.

Make sure the table is set with all of your condiments and necessities.  We lined up the butter, 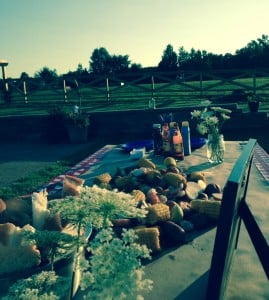 hot sauces, and cocktail sauce on one end of the table and the paper towels, sliced baguettes, and drinks on the other end.

Then it was time for just a few things to make it special.  Not much was needed because we wanted to keep the food the true star of the show.  I added a 5×7 framed picture of the American flag and some wildflowers in mason jars.  For this boil, I sent my daughter out to gather some Queen Ann’s Lace.  Its white and airy flowers always say summer to me and a couple of blooms is all it takes!

Now, my picnic table wasn’t quite large enough for everyone to sit around and 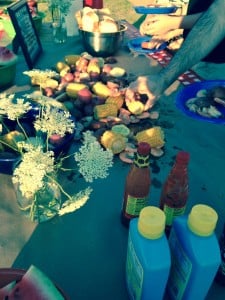 eat, so we did use plates this time.  Guests filled their plates and sat in chairs around the yard.  Also, if you think you might have guests who won’t like eating with their hands, it’s a good idea to bend tradition a little and have just a few forks available.

There’s not much else to know about hosting a boil except that now it’s time for you to throw your own!

I hope your Labor Day doesn’t have you laboring in the kitchen or over a hot grill prepping the usual burgers and dogs.  I hope it finds you gathered with family and friends, deep in good conversation sprinkled with laughter, savoring the last days of summer with a slow smile and a low country boil.