I don’t know about you, but I seriously dig some spicy dill pickles.  The spicier and more garlicky, the better.  I don’t know when that happened.  But I do know I haven’t always felt that way.  As a matter of fact, there was a time when I didn’t like dill pickles at all.  And that was a crying shame because back in my day dill pickles were prime concession stand food.  Football games, baseball games, anytime there was a concession stand, you could bet there would be a giant jar of large dill pickles.  Pickles would be fished out one by one with tongs, wrapped in paper and traded to each of my friends for 2 quarters each.  I would pass. 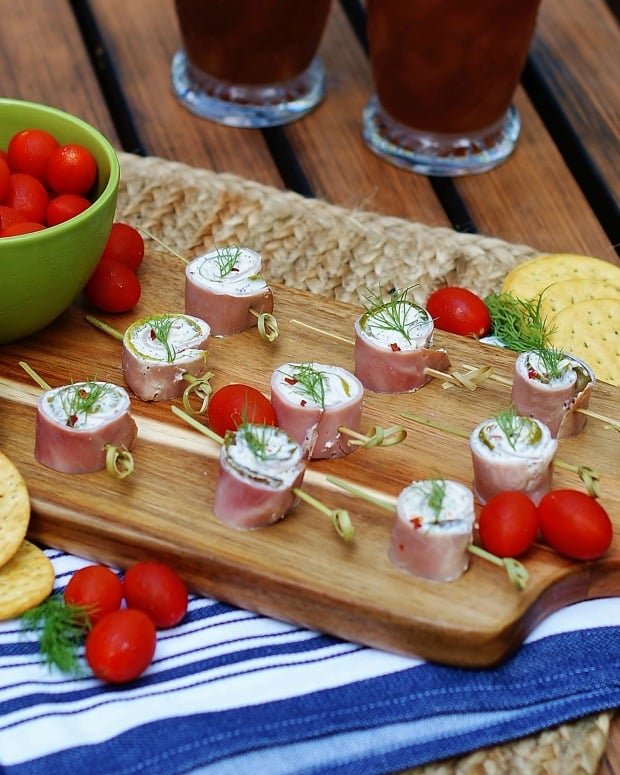 But then my tastebuds changed.  And thank goodness!  Because I don’t have to pass on the pickles anymore.  And come game day, I can eat my weight in these Ham & Dill Pickle Rollups!  As a matter of fact, I love these any day.  They make great after school snacks, are awesome appetizers at picnics, game nights, and cookouts.  And if you’re low carbing it… well… girl, you’re about to get your pickle on because these aren’t just your ordinary rollups, these are made pinwheel style with a little red pepper kick.  And you can’t eat just one.  We’ll not talk about how many I ate while doing working on this recipe.  We’ll just leave that alone. 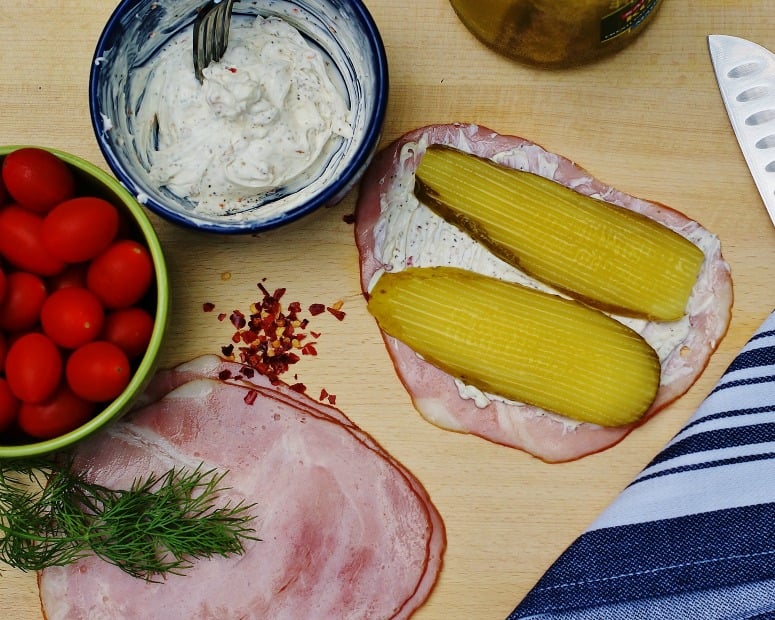 The process for these ham & dill pinwheel rollups is pretty straightforward.  However my first batch didn’t look all that great.  Tasted great.  But looks… um, well… let’s just say they were all over the place.  I immediately had horrors of Mr. ASD, The Engineer, coming in and suggesting the use of rulers and measurements, formulas and ratios for a perfectly formed Euclidean spiral.  I could not.  Seriously.  . 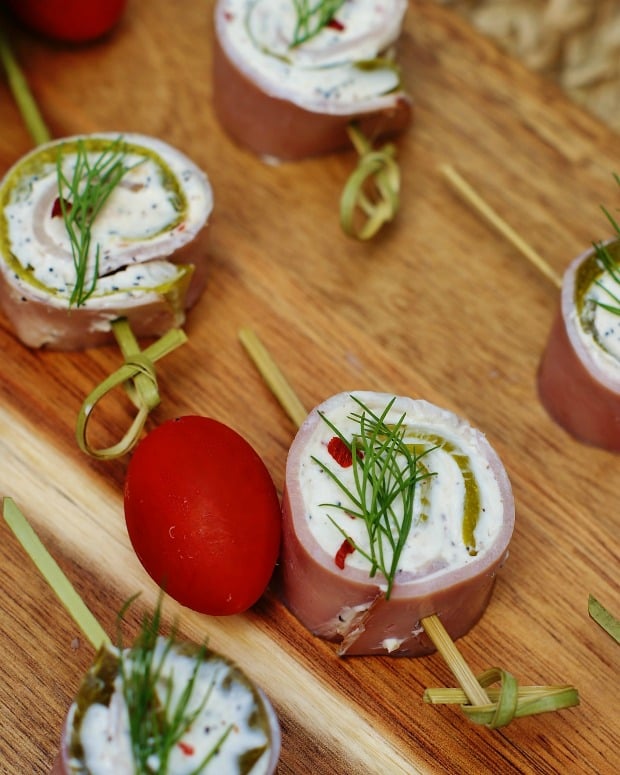 So I came up with a few little tricks of my own to make these pinwheels pretty much foolproof.  After making my cream cheese mixture, I found it was important to pat all the pickles dry.  Too much pickle juice made the whole business too wet and messy.  It was also important to cut the pickle slices about 1/2 inch shorter than the ham slices before rolling.  This made it easier and so much neater to close off the pinwheel. 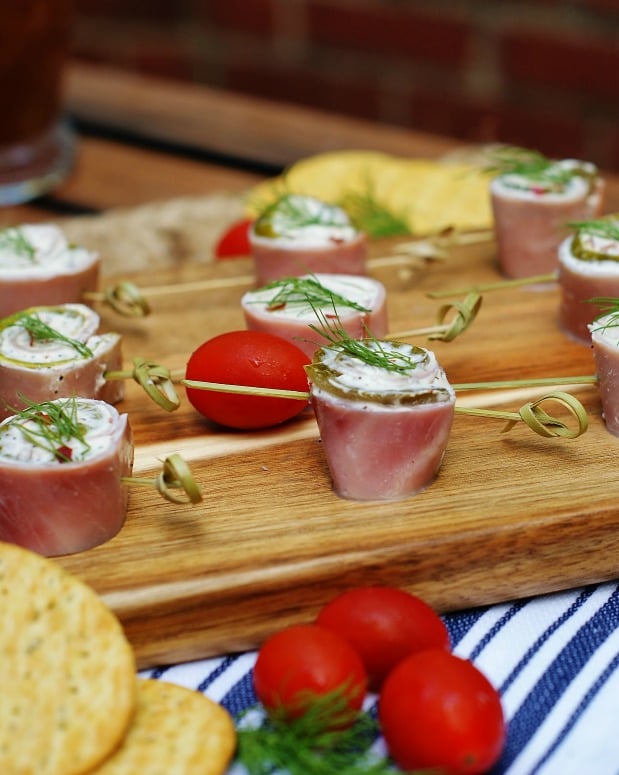 I also had to take my time rolling and not sweat it if some cream cheese squeezed out in the process.  Not to mention, I had to stop a time or two mid roll and tuck the pickle back in.  But no big deal.  I can say, the thinner the pickle slice, the easier the roll.  And when all was said and done, I used a butter knife and topped off my ham and dill pickle pinwheels with extra cream cheese to make up for cheese I lost when rolling. 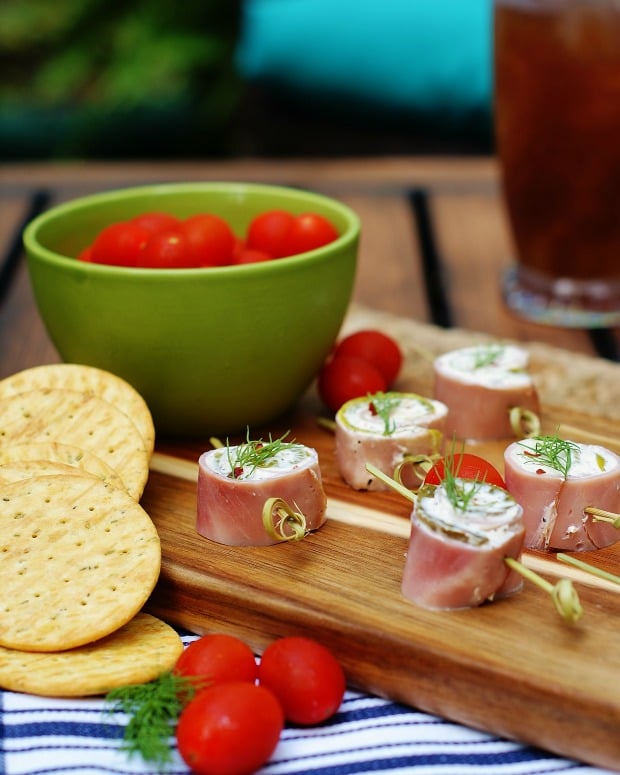 A lot of times, ham and dill roll ups are just made with a hunk of pickle, wrapped with ham.  And those are good.  But why settle for what others are doing? In this case, spicing up the cream cheese with a little pickle juice and a pepper kick, going for the pinwheel and even throwing on a little fresh dill garnish is absolutely the way to go.  A little extra is always worth it.  And it’s the little things that take something from “Oh, I’ve had those…”  to “We love it when you make the…”  So, go ahead.  Roll away.  Snack time is waiting! 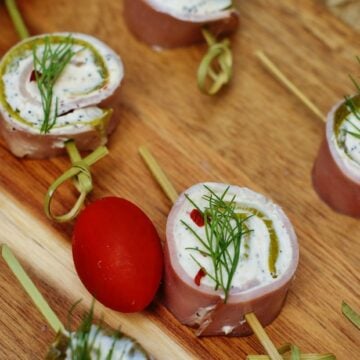 ***Pin These Ham & Dill Pickle Pinwheels with a Kick For Later!*** 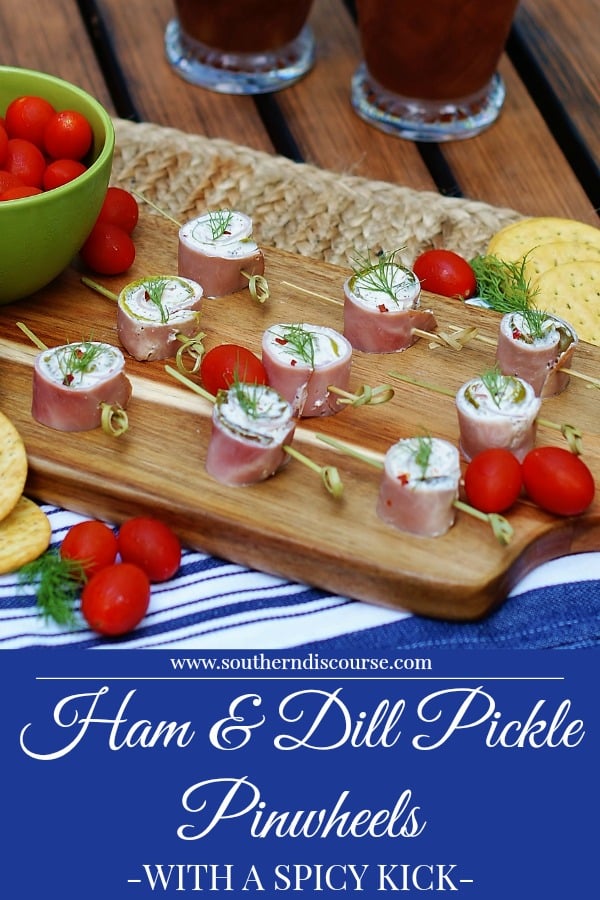 « What is a Gracious Thanksgiving Hostess?
Easy Watermelon Centerpiece How-To »